It seems as if for one of their Spring 2013 Haute Couture looks, Maria Grazia Chiuri and Pierpaolo Piccioli went into the archives - just not the Valentino ones. 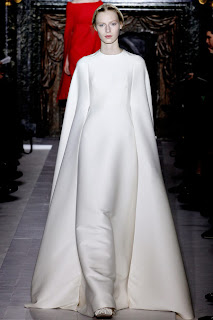 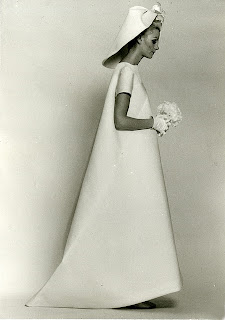 I actually really like the Valentino ensemble and wish there had been more like it in the collection. I mean, everyone knows that Chiuri and Piccioli can do embroidered/ lacey/ beaded florals with a blindfold on - a little austerity would be pretty cool in what is shaping up to be a very romantic Haute Couture season.
Email ThisBlogThis!Share to TwitterShare to FacebookShare to Pinterest
1 Comments

Regarding flowers and trees


Karl Lagerfeld can't move mountains just yet. Today, he had to settle for a mere forest, shipped into the Grand Palais tree by tree. His guests wandered through the woods till they happened upon a classical amphitheater. "Neo-classical," Karl clarified. He was dreaming of Weimar, sylvan hub of German Romanticism in the late eighteenth century, home to Goethe and Schiller.

Moved some trees? He's in good company. The film director F.W. Murnau (of the other Weimar) also had a predilection for freighting foliage. From Bronwyn Cosgrave's Made For Each Other: Fashion and the Academy Awards:

Murnau was an uncompromising perfectionist. For one scene in Sunrise, he insisted a species of deciduous tree be transported hundreds of miles from Lake Arrowhead to the Fox Hollywood lot, where three hundred Mexican laborers glued new leaves to its withered branches. Once erected on set, it so displeased Murnau, he insisted more new foliage be manually applied while swarms of salaried extras hung about waiting for their cue.

Seriously though, the Haute Couture collections are so aggressively flora-oriented this year. For me a lot of it borders on being saccharine and I'm not sure that I love it. What I do love is the return of gentle bubble and tulip hems. 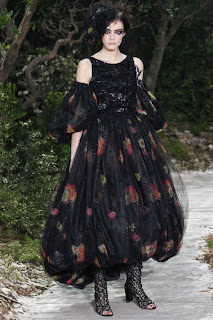 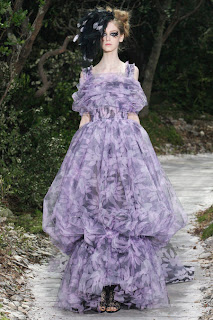 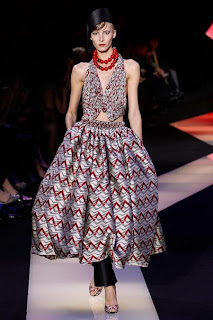 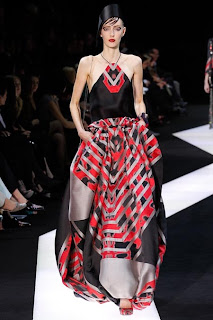 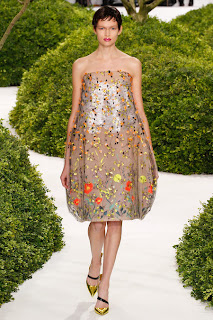 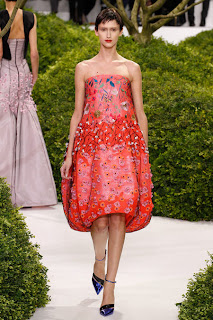 Utterly (but not too) sweet.
Email ThisBlogThis!Share to TwitterShare to FacebookShare to Pinterest
0 Comments

In the latest edition of me predicting a trend that will never (ever) come to fruition, allow me to present the pinball machine: 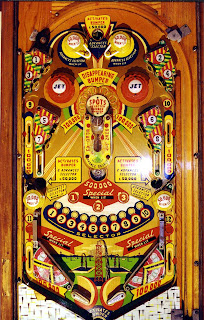 Bearing in mind that we just can't seem to quit graphic fabric prints and particularly symmetrical ones, I was actually a little surprised to realise that the idea hasn't been done by some Black Milk-esque label.

So I set about finding the perfect pinball image, a "classic" pinball machine design. Post web-trawl, however, I'm now not certain that such a thing exists. What's striking is how incredibly varied pinball design seems to be.  If there is some essential, classic design, I haven't been able to find it - and I love the idea of a thing with no true face, like a writer who has only ever created parodies.

I suspect that a lot of the vague pinball imagery floating around my brain is based on machines from the 1970s, a time when nostalgia for the 1950s (Grease-style) was rife. Interesting, but as inspiration for a fashion print, also kinda messy.

In terms of a fabric print that would appropriate the pinball machine aesthetic it might be difficult to create a look that was distinct from the comic book stylings of, say, Romance Was Born's Spring/Summer 2013 collection. 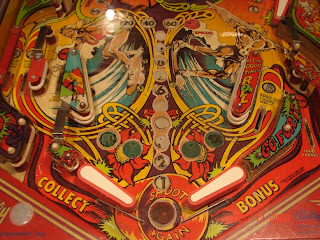 Another already familiar motif evident in the visual world of the pinball machine is the 1950s pinup girl: 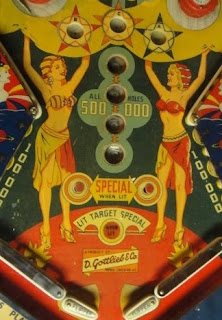 - which morphs easily into the back arch-ery of Mudflap Girl-style sleaze: 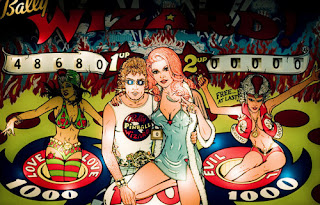 Again, all very interesting, but not very original so far as fashion is concerned.

So is there anything at all worthwhile to be taken from the idea of a pinball print? If there is I think it has to come from a very literal representation of recognisable features of a pinball machine, e.g. bumpers, wire ramps and, most importantly, flippers:

In fact, the suggestive placement of flippers is probably the main thing this idea has going for it.
Email ThisBlogThis!Share to TwitterShare to FacebookShare to Pinterest
0 Comments 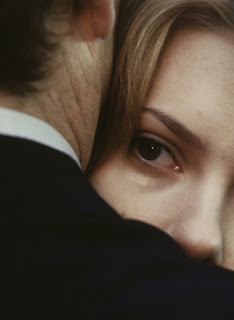 Lost In Translation is my least favourite Sofia Coppola film, but a thought just occurred to me, and - zero overstatement ahead - it changes everything.

Said thought concerns the hotel lobby exchange between Charlotte, her husband John, and Kelly the starlet. Coppola denies it, but it definitely feels like John and Kelly were based on the director's ex-husband, Spike Jonze and his erstwhile leading lady, Cameron Diaz, respectively. That would make Sofia, Charlotte, geddit? That was an aside though. What matters is this:


Kelly: But listen, let's all go out for a drink sometimes. Yeah?
John: Yeah, yeah.
Kelly: You know, call me, okay?
John: Yeah, okay.
Kelly: Alright. Listen, I'm under Evelyn Waugh. Shh, okay?
Charlotte: [after Kelly leaves] Evelyn Waugh? Evelyn Waugh was a man.
John: Oh, come on, she's nice. What? You know, not everybody went to Yale. It's just a pseudonym, for Christ's sake.

Fasten your seatbelts folks, here's my (decade in-the-making) revelation: Evelyn Waugh's first wife was also called Evelyn. As in, her name was also Evelyn Waugh. Does my excessive use of italics impress upon you the immense importance of this realisation?

What does it all mean!? Is Charlotte not only a snob but a dumb snob too? What does that make Sofia?Is Coppola making a wider statement about the lack of recognition comedic actresses in Hollywood receive? That the kind of comic precision seen in the performances of Anna Faris, Cameron Diaz, Kate Hudson, Anna Kendrick and their ilk, performances that often result in box office succes but seldom attract critical praise (nor, indeed, attention), reveals a certain genius?

Probably not, ay. Well goddamnit, I didn't get pummeled for five years by the NSW Board of Studies English Syllabus just to NOT project my own views and feelings onto any given "text" I encounter.
Email ThisBlogThis!Share to TwitterShare to FacebookShare to Pinterest
0 Comments